Welcome to Top of Oklahoma Jamboree 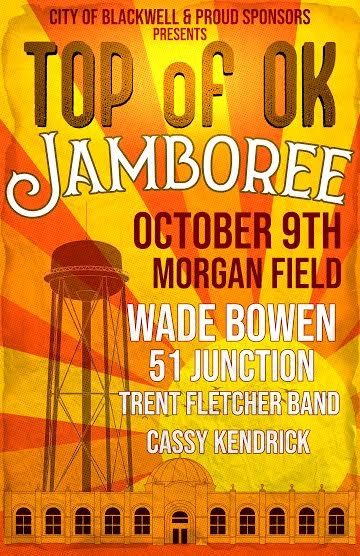 The date is approaching fast and we’re making preparations. Don’t miss out!

Mark your calendars for Saturday, October 9th, where rising stars of country music will be burning bright in Blackwell for the first annual Top of Oklahoma Jamboree, brought to you by the City of Blackwell and proud sponsors!

Morgan Field will be transformed into an open-air concert venue beyond your wildest dreams that will host Wade Bowen, 51 Junction, The Trent Fletcher Band, and Cassy Kendrick...all for FREE to the public!

Wade Bowen “blends the many flavors of Texas into bold and captivating music” with 3 albums that charted in the US Country Music Top 10.

51 Junction, from the birthplace of Red Dirt music itself in Stillwater, is a band of lifelong musicians who use their guitars, fiddles, and vocals to express their deeply personal lyrics.

The Trent Fletcher Band, also from Stillwater, is “keeping Red Dirt alive” according to the website Raised Rowdy. They’re known for their viral “Don’t Drink the Whiskey”, and other soulful, rambunctious tracks.

Cassy Kendrick is a local artist who can be found on YouTube where the unmistakable mastery of her guitar along with her powerful vocals make her a force to be reckoned with as an up-and-coming act.

Taking place during Homecoming weekend, we encourage all returning classes to attend and have fun as well!

Follow us on social media for more information, including concert times, food vendors, shops, and more!

We’re all friends here, tag us in your pics and videos!

Want to be a Sponsor?

Put your company or business in front of hundreds or even thousands of attendees.

Sign up to hear from us about specials, sales, and events.

Move right to the front of the stage and have the best view of the bands with a Pit Pass.